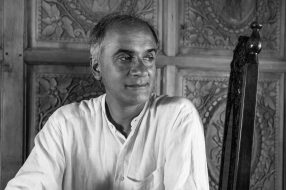 Pico Iyer has been a full-time writer since 1982, publishing 16 books, translated into 23 languages, on subjects ranging from the Dalai Lama to globalism, from the Cuban Revolution to Islamic mysticism. His newest book, The Half Known Life: In Search of Paradise, traveling from Iran to North Korea and Jerusalem to Varanasi in search of a better world, will be published on Jan. 10, 2023.  Previous books include such long-running sellers as Video Night in Kathmandu, The Lady and the Monk, The Global Soul, The Open Road and The Art of Stillness. He has also written the introductions to more than 70 other books, as well as liner and program notes for Leonard Cohen, a screenplay for Miramax and a libretto.  At the same time he has often contributed up to 100 articles a year for HARPER’S, The New York Times, The New York Review of Books, the Financial Times and more than 250 other periodicals worldwide.
His four talks for TED have received more than 11 million views so far.

Pico Iyer was born in Oxford, England in 1957. He won a King’s Scholarship to Eton and then a Demyship to Magdalen College, Oxford, where he was awarded a Congratulatory Double First with the highest marks of any English Literature student in the university. In 1980 he became a Teaching Fellow at Harvard, where he received a second Master’s degree, and in subsequent years he has BEEN A FELLOW PROFESSOR OF JOURNALISM AT PRINCETON AND received an honorary doctorate in Humane Letters.

Since 1992 Iyer has spent much of his time at a Benedictine hermitage in Big Sur, California, and most of the rest in suburban Japan.