Fox News slams GOP: Voters said no thanks to the Republican alternative. They’ve indicted the Party. 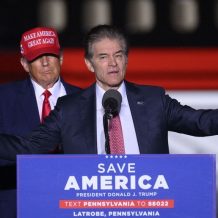 “Think about this,” Marc Thiessen said. “We have the worst inflation in four decades. The worst collapse in real wages in 40 years. The worst crime wave since the 1990s. The worst border crisis in US history. We have Joe Biden, who is the least popular president since Harry Truman since presidential polling happened and there wasn’t a red wave. That is a searing indictment of the Republican Party.”