Home » Recommended Reads » Subtle Tools: The Dismantling of American Democracy from the War on Terror to Donald Trump

Subtle Tools: The Dismantling of American Democracy from the War on Terror to Donald Trump 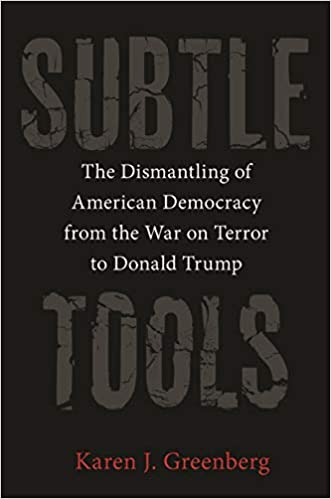 Historian Karen J. Greenberg describes how policies forged after September 11 were weaponized under Trump and turned on American democracy itself

In the wake of the September 11 terror attacks, the American government implemented a wave of overt policies to fight the nation’s enemies. Unseen and undetected by the public, however, another set of tools were brought to bear on the domestic front. In this riveting book, one of today’s leading experts on the US security state shows how these “subtle tools” imperiled the very foundations of democracy, from the separation of powers and transparency in government to adherence to the Constitution.

Taking readers from Ground Zero to the Capitol insurrection, Karen Greenberg describes the subtle tools that were forged under George W. Bush in the name of security: imprecise language, bureaucratic confusion, secrecy, and the bypassing of procedural and legal norms. While the power and legacy of these tools lasted into the Obama years, reliance on them increased exponentially in the Trump era, both in the fight against terrorism abroad and in battles closer to home. Greenberg discusses how the Trump administration weaponized these tools to separate families at the border, suppress Black Lives Matter protests, and attempt to overturn the 2020 presidential election.

Revealing the deeper consequences of the war on terror, Subtle Tools paints a troubling portrait of an increasingly undemocratic America where disinformation, xenophobia, and disdain for the law became the new norm, and where the subtle tools of national security threatened democracy itself.