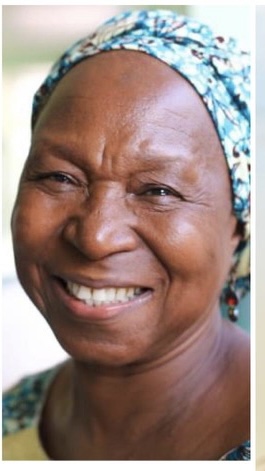 A dedicated midwife of Sierra Leonean origin, Mrs. Isha Daramy works to improve the lives of pregnant women and young mothers and to reduce natal mortality rate in both urban and rural areas.  Trained in the United Kingdom, she brought her expertise to Sierra Leone before the Civil War.  In 1990, Mrs. Daramy built her first clinic in Magbil, training traditional birth attendants.  In a country where there were no skilled midwives and no gynecologists, she worked tirelessly to help reduce the natal mortality rate by educating and monitoring nurses, promoting safe hygiene, family planning and spacing before it became an international trend.  Voted “Midwife of the Year” in 2008 by her colleagues in the UK, Mrs. Daramy brought her wealth of knowledge to closely work with health professionals where it was most needed in Sierra Leone.

Funded by her friends and friends of friends who understood the importance of her work, she expanded the only clinic serving rural communities to offer more services for thousands of people traveling far to receive free medical care.  She was a front line fighter during the Ebola outbreak in Sierra Leone, and received recognition for her efforts.  She worked as a volunteer for five years at the Maternity Hospital in Freetown and she continues to tirelessly volunteer at the maternity ward of St. John of God hospital in Lunsar, where she often delivers babies and uses the opportunity to teach the RNs and midwives her lifelong, life saving skills.

In 2021, to recognize her invaluable contribution, the UNFPA commissioned a plaque in her honor that stands on the birth waiting home built by African Viva from Spain. Furthermore, Mrs. Daramy leads the ‘Safe Motherhood’ workshop where she engages young mothers and pregnant women with medical nurses by using a local approach to breastfeeding, safe hygiene, movement during pregnancy, balanced nutrition and healthy sexual life.  She attends most sessions herself, agile and enthusiastic as she gently speaks, guides and encourages young pregnant women.  Recently she has also entered classrooms, leading sensitive conversations with high school girls who are at risk of dropping out of school once pregnant.

A mother herself, Mrs. Daramy is passionate and dedicated to empower girls and women by educating them about maintaining healthy pregnancies, assisting them during pregnancy and helping them deliver in a safe way, while keeping both the mother and the baby alive despite insurmountable challenges.  A living legend, she is a force of nature who deserves our full support to continue and expand her work.