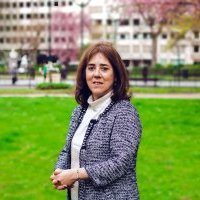 Mary Collins is Senior Policy & Advocacy Coordinator for European Women’s Lobby, a membership based organization that brings together the women’s movement in Europe to influence the general public and European Institutions in support of women’s human rights and equality between women and men.

Mary joined the EWL to coordinate the organisation’s representation and active participation at the Fourth World Conference for Women which took place in Beijing in 1995 and produced the Beijing Platform for Action. Over the last 15 years, Mary has worked on a variety of issues, including violence against women, EU asylum and human rights policies, the EU Strategy on the Rights of the Child and the UN Convention on Disabled Persons. Mary currently works on socio-economic issues that include gender pay, pension, poverty gaps and the care economy.

Mary is an expert in Economic and Social Policies. Before joining the EWL in 1995, she worked in child protection for the Health Authority in Ireland and for the European Federation of Organisations working with the Homeless (FEANTSA) in Brussels.