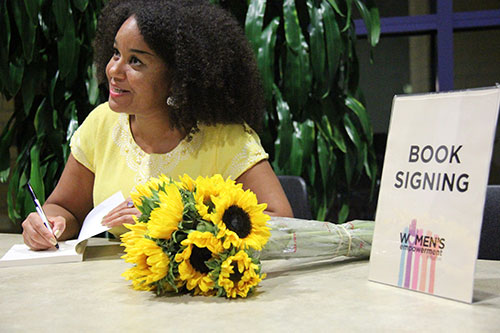 Dr. Nina Smart was first featured in December, 2016 for her work combatting female genital mutilation (FGM) through her charity, SWF International.  Since that time, Nina has expanded her leadership role on this important issue through her work with Soroptimist International (SI) and as SI delegate to the United Nations Commission on the Status of Women.

Nina is a non-violent human rights activist, sociologist, and author who educates people about female genital mutilation (FGM) and works to eradicate the practice in Sierra Leone, West Africa and prevent it from spreading in the US and Europe.  Sharing her story to break the silence of the fear that traumatizes the women and girls facing FGM, Dr. Smart shines a light on the horrors of this harmful traditional practice and encourages men and women alike to take a stand and end FGM.   In 2004, she founded Servicing Wild Flowers –SWF International, a Los Angeles based non-profit NGO that raises awareness about FGM through lectures and presentations for students, immigrants and socially conscious groups.  For over a decade she worked directly in rural areas of Sierra Leone, together with SWF partners who facilitate community meetings addressing FGM and with international organizations that hold consultative status with the United Nations.  She contributed towards the first FGM Summit in the US, participates in the US End FGM network and is a founding member of the FGM Taskforce in Los Angeles.

Nina was born in Romania, spent her teen years in Sierra Leone, emigrated to the United States, and in 2021 she returned to Romania, where she currently resides.  In 2008, Dr. Smart joined one of the largest global women’s volunteer organizations, Soroptimist International, where she has been working at the local, national and global level with fellow Soroptimists to educate and empower women and girls through education.  In addition to her activism and Soroptimist work,  Dr. Smart has been active in African and Romanian communities in the greater Los Angeles area and her efforts were recognized by Senator Mendoza of California and honored by the United States Congress.  She proudly represented her Soroptimist club, SI Downey, at the region, federation, and international level highlighting the contributions made by Downey Soroptimists in their community.

In her role as Camino Real Region Chair of International Advocacy, Dr. Smart used her expertise in world polity transmission to share information about the role SI plays in shaping international laws affecting the lives of women and girls through the United Nations.  A repeat SI delegate to the Commission on the Status of Women, Nina is also passionate to raise awareness about SI President’s Appeal for 2019-2021 – The Road to Equality.  She donates 50% of her book proceeds, Wild Flower – The True Story of a Romanian Girl in Africa, towards projects supported by SI President’s Appeal.  This September Dr. Smart celebrates 30 years since the day she escaped the violence of FGM (her incredible story is shared in Wild Flower) and she is proud to join Soroptimists in Romania in implementing the migration  project from SI President’s Appeal that aims to educate and empower women refugees, who are themselves fleeing violence.