How Trump Stole 2020: The Hunt for America’s Vanished Voters 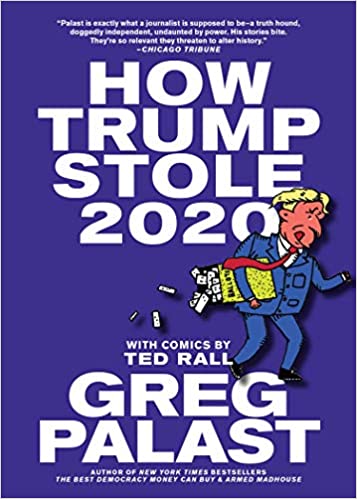 Yes, the election’s stolen but investigative reporter Greg Palast shows you how to steal it back!

Palast lets you in on the nasty secrets of Trump-merica’s democracy:

In How Trump Stole 2020, you meet the scamps, scoundrels and grifters (or “Governors” as we call them in America) doing the dirty to voters of color. Check out the photo of Palast confronting GOP Governor Kemp of Georgia whom Palast catches under a neon pig at a bar-b-que joint to ask Kemp if he’s wiping away Black voter registrations to steal the election. The response: Palast gets busted.The book includes an exclusive interview with Stacey Abrams on vote thievery–and a 48-page comic book from the piercing pen of Ted Rall.