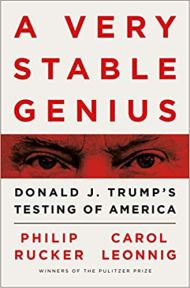 Philip Rucker and Carol Leonnig  have composed their book, they write, out of a desire to step out of the churning news cycle and “assess the reverberations” of Trump’s presidency. The result is a chronological account of the past three years in Washington, based on interviews with more than 200 sources.

Rucker is The Washington Post’s White House bureau chief; Leonnig is a national investigative reporter for the newspaper. Both have won Pulitzer Prizes. Their newspaper’s ominous, love-it-or-hate-it motto is “Democracy Dies in Darkness.” “A Very Stable Genius” flicks the lights on from its first pages. They’re meticulous journalists, and this taut and terrifying book is among the most closely observed accounts of Donald J. Trump’s shambolic tenure in office to date.