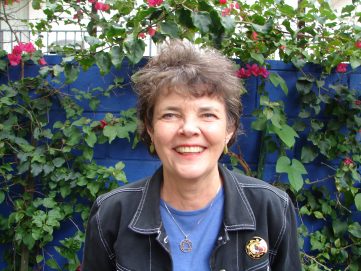 Sheila Laffey, Ph.D. is an award-winning producer/director of documentaries and short dramatic films and Adjunct Professor of Film Studies at Santa Monica College. Laffey has been teaching at Santa Monica College for nearly 20 years; one of her courses is Green Screen: Films on the Environment and Transformation. She also teaches a film appreciation course at SMC’s Emeritus College. She has a Ph.D. in Cinema Studies from N.Y.U. and was Program Coordinator for the National Audubon Society in Hawaii. A chapter about her work appears in Search for Reality: The Art of Documentary Filmmaking.

Her films are mostly about the environment. Her most recent work was as Associate Producer of Love Thy Nature, narrated by Liam Neeson that has won 26 awards and shown in 160 cities in 6 countries.

Laffey was Executive Producer of Who Bombed Judi Bari?, eco feature documentary, which won a Cine Golden Eagle, numerous other awards and screened in various theaters around the country.

Her short doc on South Central Farm also aired on this Emmy Award-winning series and premiered at AFI Fest.  She was co-producer/co-director of Show Me The Way on mentoring with Oscar nominated William Gazecki.

She produced dramatic shorts, We All Need the Forest and In the Middle of the Sea (released under the title Hawaii Eco Stories) and co-directed and produced Walden, all of which are distributed by Green Planet Films.  Other docs include Hawaii in Transition: Vision for a Sustainable Future and Geo-Thermal: A Risky Business in Hawaii’s Wao Kele O Puna Rainforest which helped save the last lowland tropical forest in the U.S.

She currently is Producer of The Paper Trail, which documents Speak for the Trees Oregon forest activists who helped save 110 acres from being clearcut, creating in its place a community forest.  It is covering ongoing threats to forests in the Pacific Northwest.

Her Ballona Wetlands film series, hosted by Ed Asner with songs by Joni Mitchell, won many awards, including a Cine Golden Eagle, Best Documentary in several festivals and a Telly Award for Natural Heroes, the Emmy Award winning Public Television series in which it aired. You can see one of the films here.  The Ballona Wetlands Land Trust is the Featured Charity this month.