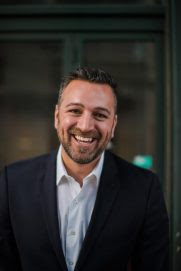 Cameron Gharabikiou is the co-founder of Justice Law Group and current candidate for Lieutenant Governor of California.  Cameron and his partner founded Justice Law Group in San Diego fifteen years ago to represent employees and individuals who have suffered from sexual harassment/assault, wage theft, negligence causing injuries, discrimination (race/gender/age/pregnancy), to name just a few areas. Cameron saw early in his career that the individual rarely received justice when fighting the large corporations or insurance companies. He wanted to play a part in leveling that playing field.

Now, Cameron might just be tackling his greatest challenge yet, running for Lieutenant Governor of California. Throughout his years in civic engagement and serving on various boards and commissions, Cameron considered running for elected office (and often received suggestions to do so). When he woke up the morning after Donald Trump was elected, he knew he had to do something, and that the time was now for California to rise up and fight back…a fight he says that he knew would require tenacity and willpower and that his background as a civil litigator, fighting for individuals’ rights, had uniquely prepared him.

Cameron knew if he was going to run, he had to stay true to his values. He’s the only democratic candidate for lieutenant governor who has rejected any contributions from corporations, PACs and/or special interests.

All his issues and positions, from environmental protections, to gun control, to social justice and many others, are neatly listed on his website where you will hear him passionately talk about what matters to him, and the people of this state. Most importantly he says, “regardless of who you vote for, just go vote on June 5th and exercise your voice.”