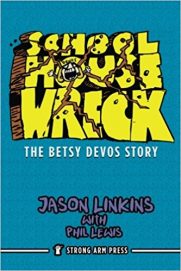 Authors Jason LInkins and Phil Lewis describe what Education Secretary Betsy DeVos is doing to destroy secular public schools in America. Born into extreme wealth, married into an Amway fortune, the sister of mercenary magnate Erik Prince, DeVos is a combination of religious extremist, crony capitalist, and reactionary conservative who has made it her mission to privatize American public education and indoctrinate children with her religious beliefs.

This is a publication of Strong Arm Press, a small imprint devoted to publishing short and digestible narratives about the Trumpworld cabinet members and policy makers who might leave lasting marks on life in the United States.  Unlike traditional publishers, Strong Arm Press relies on crowd-funded efforts to hire writers, editors, and designers to produce short books that can be published quickly.