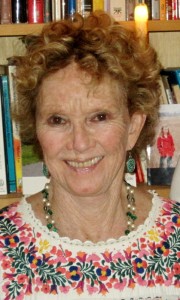 Bea Ammidown was born in New York, educated in Paris and Switzerland, and has had careers as an editor for Life Magazine and Harper’s Bazaar; a journalist with the LA Times; a publicist for MGM Studios; and a Peace Corps volunteer.  Inspired by her neighbor Norman Cousins, she founded and directed HumoRx –Laugh Wagons, a program dedicated to the healing effects of affirmative emotions on the immune system, at Children’s Hospital Los Angeles.

While traveling abroad in 1986, she suffered severe injuries in a head-on auto collision that killed her fiancé.  From the demands of learning once again to function physically through four years of major rehabilitation processes, she developed a form of yoga for her healing, and eventually for the healing of others.

She founded YogAbility Institute, a nonprofit corporation in Santa Monica, CA that offers yoga therapeutics to people with physical or mental challenges (YogAbility.org)..  Fluent in French and Spanish, Bea is a member of the International Assoc. of Yoga Therapists, Yoga Alliance, Yoga for the Special Child trained, and she is a Phoenix Rising Yoga Facilitator.