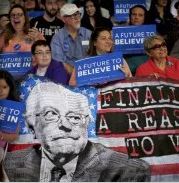 We are shifting the focus in our Facebook group, Bernie Sanders: Advice and Strategies to Win, to specifically helping Bernie achieve his legislative projects. This must take place for our group’s efforts to have any real long term effect. If you are a Facebook Friend or Friend of Friend, and want to join our group, I welcome you to do so.

I envision a kind of legislative project clearinghouse, in which members can bring up what is important to them in their state, and which might need letters to other US Senators and members of Congress from other states, as in the matter of Bernie’s effort to Save Oak Flat, a gigantic problem for all Americans in that it would involve the privatization of an entire National Forest to be turned into an ugly enormous copper mine.

I have thus asked your help in writing to the Republicans primarily, since they control the Senate Energy Committee, and that is chaired by Alaska’s Lisa Murkowski. Asking both of your Senators to join in on Bernie’s bill as cosponsors would be a superbly effective strategy at this point, whether they are Republicans or Democrats, and believe me: there is nothing worse that would doom that effort more than just writing to people with whom you feel ideologically comfortable!

Bernie’s legislative agenda, and if the cheering sections for his campaign, and the strategists and brilliant thinking that went into to get him this far, all could be coalesced into a strong and proactive legislative base, there is almost nothing we cannot accomplish in terms of actualizing Bernie’s legislative goals. You have seen his success thus far in terms of the platform; the real battles and Bernie’s ideas’ fruition are ahead, in the Senate!

To accomplish this will require a very serious focus, good communications, guidance from Bernie and his Senate staff, not his campaign staff, and a clear understanding that we will not allow the good energy and good karma of his brilliant campaign to be dissipated and disassembled by a campaign of having to choose between the lesser of two evils.

I welcome your feedback regarding this shift, as well as adding members that would be interested in our new focus. I welcome your posting immediate legislative concerns, like GMO, labeling, TPP and other trade agreements and compacts, “Defense” Spending, Senate Confirmations, etc., as long as they are specific bills with committee assignments, (it is with the Committee assignments in which I see great room for very large effects from our efforts). I am less interested in general areas for soap box grandiloquence and grandstanding, cheering sections, and “preaching to the choir.”

We already have a common ground, and that is to advance Bernie Sanders legislative efforts. Truly, a new legislative project exchange, a clearing house of ideas, advice and strategies, and a sounding board with unprecedented power and impact: this is what this group is now dedicated to.

If you want to communicate directly with me, email is below. I welcome drafts of letters before we publish them and maybe before you send them. You are welcome to publish such letters here also, but we must continually make clear that they are examples to inspire you to write your own, and not templates to be copied: those don’t work at all in the US Senate.

We can see how this would in due course result in a great surge of Bernie Sanders legislative accomplishments, plus some highly trained and experienced new liberal Democrat operatives with serious and meaningful successes under their belts, all of which are vitally important in the midterm elections in 2018 and in the next Presidential elections in 2020.

Stephen Fox has been an art dealer and consumer protection activist in Santa Fe since 1980. He specializes in Native American paintings and ledger art. He has been working for a decade to get the FDA to rescind its approval for the neurotoxic and carcinogenic sweetener, Aspartame. Bills to do so were introduced in the State Senates of New Mexico and Hawaii, but both were overwhelmed by lobbyists from Ajinomoto, the world’s largest manufacturer of both Aspartame and another neurotoxic additive, monosodium glutamate.