Home » Recommended reads » Yanis Varoufakis – And the Weak Suffer What They Must?

Yanis Varoufakis – And the Weak Suffer What They Must? 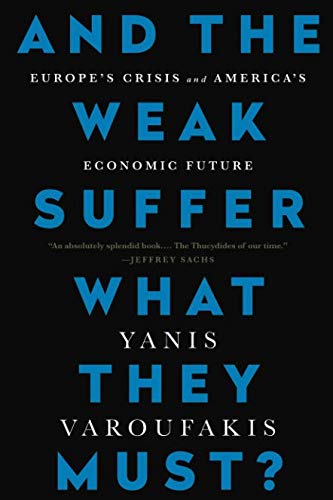 The crisis in Europe is not over, it’s getting worse!

In this dramatic narrative of Europe’s economic rise and spectacular fall, Yanis Varoufakis shows that the origins of the collapse go far deeper than our leaders are prepared to admit – and that we have done nothing so far to fix them.

“A titanic battle is being waged for Europe’s integrity and soul, with the forces of reason and humanism losing out to growing irrationality, authoritarianism, and malice, promoting inequality and austerity. The whole world has a stake in a victory for rationality, liberty, democracy, and humanism.“

In January 2015, Yanis Varoufakis, an economics professor teaching in Austin, Texas, was elected to the Greek parliament with more votes than any other member of parliament. He was appointed finance minister and, in the whirlwind five months that followed, everything he had warned about—the perils of the euro’s faulty design, the European Union’s shortsighted austerity policies, financialized crony capitalism, American complicity and rising authoritarianism—was confirmed as the “troika” (the European Central Bank, International Monetary Fund, and European Commission) stonewalled his efforts to resolve Greece’s economic crisis.

Here, Varoufakis delivers a fresh look at the history of Europe’s crisis and America’s central role in it. He presents the ultimate case against austerity, proposing concrete policies for Europe that are necessary to address its crisis and avert contagion to America, China, and the rest of the world. With passionate, informative, and at times humorous prose, he warns that the implosion of an admittedly crisis–ridden and deeply irrational European monetary union should, and can, be avoided at all cost.

Yanis Varoufakis is the former finance minister of Greece. Before entering politics, he was a professor of economics at the University of Texas, Austin. He is also the author of The Global Minotaur: America, Europe and the Future of the Global Economy

In his own words: “Let me begin with a confession: I am a Professor of Economics who has never really trained as an economist. But let’s take things one at a time.”  Read more in his blog, here.

“General Motors is alive and kicking today, it is because in 2009 President Obama’s administration wrote off 90 percent of its debt.”

“Once their gaze turned back toward Europe, the puzzle dissolved: West Germany was the obvious equivalent and, indeed, a splendid candidate for the role of the global plan’s European shock-absorbing pillar—certainly not Britain.”

“In 1950 the European Union was officially born in the form of a German-dominated cartel of coal and steel, run of course by a cross-border French-dominated administration located in Brussels. Its name? The European Steel and Coal Community.”

“European finance ministers have got an opponent who will not recede easily. And one who, furthermore, appears to have the stamina of a long distance runner to go the whole way.”
– The Guardian

“The book is … highly readable. It is also important, outlining a perspective on global economics that influences policy thinking in broader circles than the radical left.”
– Financial Times

The financial catastrophe that nearly undid the euro, the flawed, fragile currency of most of Europe, is placed under a microscope by Varoufakis. A trenchant critic.
– Publishers Weekly