Rad American Women A-Z: Rebels, Trailblazers, and Visionaries who Shaped Our History . . . and Our Future! 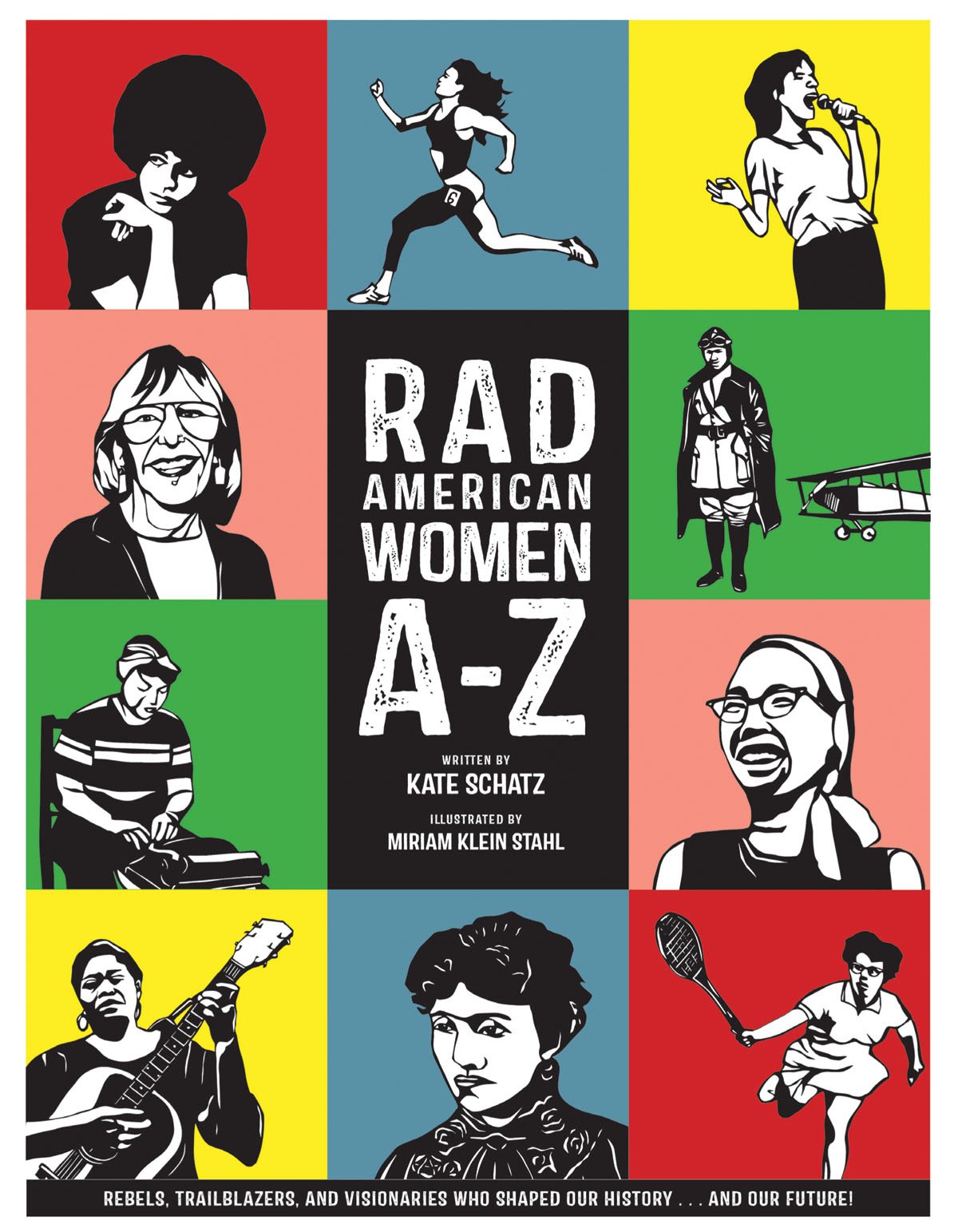 Unable to find the kind of book she wanted for her young daughter, author Kate Schatz decided to write it herself. “I want her to grow up to be empowered and strong and inspired, and I’m very conscious of the images of women and girls in the media” .

Like all A-Z books, this one illustrates the alphabet—but instead of “A is for Apple”, A is for Angela—as in Angela Davis, the iconic political activist. B is for Billie Jean King, who shattered the glass ceiling of sports; C is for Carol Burnett, who defied assumptions about women in comedy; D is for Dolores Huerta, who organized farmworkers; and E is for Ella Baker, who mentored Dr. Martin Luther King and helped shape the Civil Rights Movement.

And the list of great women continues, spanning several centuries, multiple professions, and 26 diverse individuals. There are artists and abolitionists, scientists and suffragettes, rock stars and rabble-rousers, and agents of change of all kinds.

The book includes an introduction that discusses what it means to be “rad” and “radical,” an afterword with 26 suggestions for how you can be “rad,” and a Resource Guide with ideas for further learning and reading.

American history was made by countless rad—and often radical—women. By offering a fresh and diverse array of female role models, we can remind readers that there are many places to find inspiration, and that being smart and strong and brave is rad.

Kate Schatz is a writer, editor, and educator. Her book of fiction, Rid of Me: A Story, was published in 2006 as part of the acclaimed 33 1/3 series. Her work has been published in Oxford American, Denver Quarterly, Joyland, East Bay Express, and San Francisco Chronicle, among others. Her short story “Folsom, Survivor” was a 2010 Notable Short Story in Best American Short Stories 2011. She is a co-founder of The Encyclopedia Project, and is the Chair of the School of Literary Arts at Oakland School for the Arts. Kate received her MFA in Fiction Writing from Brown, and a double BA in Women’s Studies/Creative Writing from UC Santa Cruz. She lives with her family on an island in the Bay Area.

“I feel honored to be included in this book. Women need to take radical steps to become feminists, and to be strong to fight for their rights and those of others facing oppression and discrimination. The world needs rad women to create a just society.”
– Dolores Huerta, Labor Leader, Civil Rights Activist

This lively abecedary introduces 25 inspiring women and their accomplishments […] Schatz opens with a discussion of different meanings of rad/radical (‘A radical can be a person who wants to make big changes in society’), and the snappy mini-biographies that follow hit the highlights of the women’s lives and legacies in an accessible, conversational tone. Bright hues provide backdrops for Stahl’s angular cut-paper portraits, which emphasize the subjects’ power, humor, and strength.
– Publishers Weekly

Ever wanted a women-centric history book to hand to a kid? This March, publisher City Lights/Sister Spit is releasing an exciting new book that tells the stories of 26 important American women, one for each letter of the alphabet. Rad American Women A-Z features biographies of women from Angela Davis to Zora Neale Huston. Author Kate Schatz and illustrator Miriam Klein Stahl highlight a great selection of women—the group is diverse in terms of race, era, and in their field of work, ranging from scientists to writers and activists.
– BITCH Magazine