John Perkins – The New Confessions of an Economic Hit Man 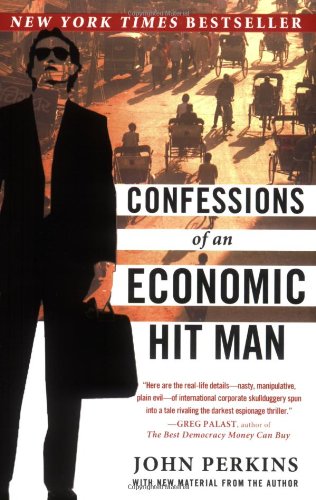 Economic hit men (EHMs) “are highly paid professionals who cheat countries out of trillions of dollars. Their tools include fraudulent financial reports, rigged elections, payoffs, extortion, sex, and murder.” John Perkins wrote those words—he was one of them. In this extraordinary new version of his now-classic book, Perkins reveals how economic hit men, the assassin jackals who back them up, and the system they represent, have spread all over the globe—and how we can fight back.

Former economic hit man John Perkins shares new details about the ways he and others cheated countries around the globe out of trillions of dollars. Then he reveals how the deadly EHM cancer he helped create has spread far more widely and deeply than ever in the US and everywhere else to become the dominant system of business, government, and society today. Finally, he gives an insider view of what we each can do to change it.

Economic hit men are the shock troops of what Perkins calls the corporatocracy, a vast network of corporations, banks, colluding governments, and the rich and powerful people tied to them. If the EHMs can’t maintain the corrupt status quo through nonviolent coercion, the jackal assassins swoop in. The heart of this book is a completely new section, over 100 pages long, that exposes the fact that all the EHM and jackal tools false economics, false promises, threats, bribes, extortion, debt, deception, coups, assassinations, unbridled military power are used around the world today exponentially more than during the era Perkins exposed over a decade ago.

The material in this new section ranges from the Seychelles, Honduras, Ecuador, and Libya to Turkey, Western Europe, Vietnam, China, and, in perhaps the most unexpected and sinister development, the United States, where the new EHMs bankers, lobbyists, corporate executives, and others con governments and the public into submitting to policies that make the rich richer and the poor poorer.

But as dark as the story gets, this reformed EHM also provides hope. Perkins offers a detailed list of specific actions each of us can take to transform what he calls a failing Death Economy into a Life Economy that provides sustainable abundance for all.

John Perkins was formerly Chief Economist at a major international consulting firm where he advised the World Bank, United Nations, the IMF, U.S. Treasury Department, Fortune 500 corporations, and governments in Africa, Asia, Latin America, and the Middle East. Since then, his books on economics, geo-politics, and indigenous cultures have sold more than 1 million copies. He is a founder and board member of Dream Change and The Pachamama Alliance, nonprofits devoted to establishing a world our children will want to inherit.  Read his blog here.

“It is driven not by a small band of men but by a concept that has become accepted as gospel: the idea that all economic growth benefits humankind and that the greater the growth, the more widespread the benefits. This belief also has a corollary: that those people who excel at stoking the fires of economic growth should be exalted and rewarded, while those born at the fringes are available for exploitation.”

“In my opinion, the difference between the crusaders and us was a matter of degree. Europe’s medieval Catholics claimed their goal was to save Muslims from purgatory; we claimed that we wanted to help the Saudis modernize.”

“EHMs provide favors. These take the form of loans to develop infrastructure—electric generating plants, highways, ports, airports, or industrial parks. A condition of such loans is that engineering and construction companies from our own country must build all these projects. In essence, most of the money never leaves the United States; it is simply transferred from banking offices in Washington to engineering offices in New York, Houston, or San Francisco. Despite the fact that the money is returned almost immediately to corporations that are members of the corporatocracy (the creditor), the recipient country is required to pay it all back, principal plus interest.”

“When I read Confessions of an Economic Hit Man, I could not have known that, some years later, I would be on the receiving end of the type of ‘economic hit’ that Perkins so vividly narrated . . .”
-Yanis Varoufakis, former Minister of Finance, Greece

“Mr. Perkins’s core message is that American corporations and government agencies employ two types of operatives: ‘economic hit men,’ who bribe emerging economies, and ‘jackals,’ who may be used to overthrow or even murder heads of state in Latin America and the Middle East to serve the greater cause of American empire. . . . [This} book seems to have tapped into a larger vein of discontent and mistrust that Americans feel toward the ties that bind together corporations, large lending institutions and the government — a nexus that Mr. Perkins and others call the ‘corporatocracy.’”
—The New York Times

“This riveting look at a world of intrigue reads like a spy novel . . . Highly recommended.”
—Library Journal