Thomas Piketty – The Economics of Inequality 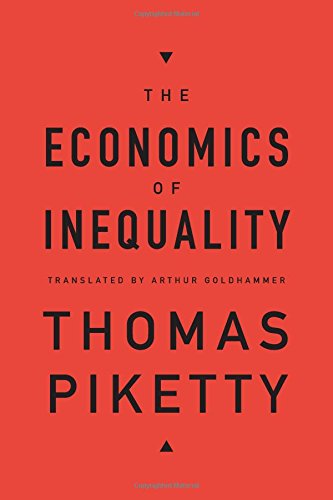 Succinct, accessible, and authoritative, Thomas Piketty’s The Economics of Inequality is the ideal place to start for those who want to understand the fundamental issues at the heart of one the most pressing concerns in contemporary economics and politics.

Thomas Piketty—whose Capital in the Twenty-First Century pushed inequality to the forefront of public debate—wrote The Economics of Inequality as an introduction to the conceptual and factual background necessary for interpreting changes in economic inequality over time. This concise text has established itself as an indispensable guide for students and general readers in France, where it has been regularly updated and revised. Translated by Arthur Goldhammer, The Economics of Inequality now appears in English for the first time.

Piketty begins by explaining how inequality evolves and how economists measure it. In subsequent chapters, he explores variances in income and ownership of capital and the variety of policies used to reduce these gaps. Along the way, with characteristic clarity and precision, he introduces key ideas about the relationship between labor and capital, the effects of different systems of taxation, the distinction between “historical” and “political” time, the impact of education and technological change, the nature of capital markets, the role of unions, and apparent tensions between the pursuit of efficiency and the pursuit of fairness.

THOMAS PIKETTY is professor of economics at the Paris School of Economics and theEcole des hautes etudes en sciences sociale, and Centennial Professor at the London School of Economics’s International InequalitiesInstitute. He is the author of numerous articles and a dozen books. He has done major historical and theoretical work on the interplay between economic development and the distribution of income and wealth. His most recent book is Capital in the Twenty-First Century.

Arthur Goldhammer, a translator specializing in French history, literature, philosophy, and social science, has translated more than a hundred works by many of France’s most noted authors. He is on the editorial board of the journal French Politics, Culture and Society and in 1996 was named Chevalier de l’Ordre des Arts et des Lettres by the French Minister of Culture.

“Even a brief guide to basic concepts in Piketty s field of study can remind you, at every turn, that something profound is going on within the global economic system. The data, especially the data from recent decades, does not conceal the tale Avarice and plunder play no part in the language of economics, but they too are causes and consequences of the phenomena Piketty describes. In some respects, his work is an assault on the kind of cult thinking that these days passes for economic and political analysis.”
–Ian Bell, Glasgow Herald, 07/25/2015

“If Piketty is right, inequality is increasing and cannot be cured by the free market; we must understand the problem to understand how to address it. This should be required reading for every concerned citizen.”
—Publishers Weekly