Home » Recommended reads » Dennis Childs – Slaves of the State: Black Incarceration from the Chain Gang to the Penitentiary

Dennis Childs – Slaves of the State: Black Incarceration from the Chain Gang to the Penitentiary 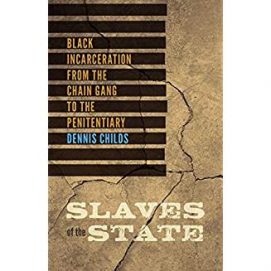 In Slaves of the State Dennis Childs argues that the incarceration of black people and other historically repressed groups in chain gangs, peon camps, prison plantations, and penitentiaries represents a ghostly perpetuation of chattel slavery. With more than 2.3 million people in the country’s jails, prisons, and immigrant detention centers, Childs exposes slavery as a continuing social reality of U.S. empire.

The Thirteenth Amendment to the United States Constitution, passed in 1865, has long been viewed as a definitive break with the nation’s past by abolishing slavery and ushering in an inexorable march toward black freedom. Slaves of the State presents a stunning counterhistory to this linear narrative of racial, social, and legal progress in America.

He exposes how the Thirteenth Amendment’s exception clause—allowing for enslavement as “punishment for a crime”—has inaugurated forms of racial capitalist misogynist incarceration that serve as haunting returns of conditions Africans endured in the barracoons and slave ship holds of the Middle Passage, on plantations, and in chattel slavery.

Childs seeks out the historically muted voices of those entombed within terrorizing spaces such as the chain gang rolling cage and the modern solitary confinement cell, engaging the writings of Toni Morrison and Chester Himes as well as a broad range of archival materials, including landmark court cases, prison songs, and testimonies, reaching back to the birth of modern slave plantations such as Louisiana’s “Angola” penitentiary.

Slaves of the State paves the way for a new understanding of chattel slavery as a continuing social reality of U.S. empire—one resting at the very foundation of today’s prison industrial complex that now holds more than 2.3 million people within the country’s jails, prisons, and immigrant detention centers.

Slaves of the State cannot receive enough superlatives: eye-opening, deeply disturbing, intellectually stimulating, terrible, brilliant. Dennis Childs has written a moving and intricately researched book, which weaves novels and memory, the past and the present, ancient artifacts and modern tools of repression to reveal an unwelcome truth about modern day America and the biggest prison system on earth.
—Mumia Abu-Jamal, author of Writing on the Wall: Selected Prison Writings of Mumia Abu-Jamal

Dennis Childs ‘digs a ditch’ in Slaves of the State, laboring to present the tortured captives of chain gangs and penitentiaries in ways that bring the captors to shame. With incisive scholarship, Childs analyzes the terrors of black incarceration and trauma. This daring book simplifies a democracy corrupted by penal enslavement. Its haunting critique of the racial-sexual production of misery and ghosts, through the ‘terrorizing structure of US penal law,’ needs to be read, and remembered.
—Joy James, author of Seeking the Beloved Community