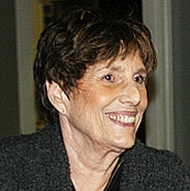 Dorothy Reik is founder and President of Progressive Democrats of the Santa Monica Mountains, and owner of a daily listserve which is the source of many of the articles posted on Janet’s Good News.

The photo shows her in between Robert Scheer and Cynthia McKinney.

Robert Scheer is editor-in-chief of Truthdig, which is another source of many articles posted in our newsletter.

Cynthia McKinney, politician and activist, served six terms in the House of Representatives, and in 2008 was the Green Party nominee for President of the United States.

My project was to start a progressive Democratic club that would work inside the Democratic Party to further progressive ideas. I felt that instead of fighting from the outside, I could get inside and work that way. I wanted to make our Democratic elected official allies instead of enemies. I thought is was important because I was a Democrat and my party was not reflecting my ideals.

I got all the progressives at my local Democratic club to join me in forming this new club. To get more members and get our message out I started a listserv and began to send e-mails out every morning covering the issues of the day framing them from a progressive point of view. It, along with the club, took off and now my e-mails are read all over the country.

Readers can help by joining my listserv and forwarding e-mails they feel are important. The dues are $5/year. People can join Progressive Democrats of the Santa Monica Mountains on our website, www.pdsmm.org, and they can e-mail me at dorothyreik@pdsmm.org to be put on our listserv. We meet in Topanga Canyon, but anyone can join even if they cannot attend meetings. Of course, they can also start their own Democratic Club too. It works!