Home » Blog » Hillary and the Lesser Evil by Janet Maker

Hillary and the Lesser Evil by Janet Maker 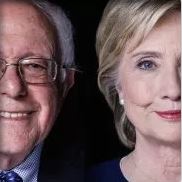 Everyone seems to be discussing whether, if Bernie doesn’t get the nomination, his supporters should vote for Hillary.  One thing to keep in mind is that the FBI is currently conducting an inquiry into her emails.  Even if the FBI clears her of wrongdoing, it is possible that something detrimental could surface from the emails or from her Wall Street speeches, or that she could be implicated in electoral fraud (there is a lot of buzz about her role in the debacle in New York).   In case something emerges that is bad enough to make her unelectable, we should be very grateful that Bernie has promised to remain in the race.

However, if she wins the nomination, what should we do?  I’m sure progressives agree that she is not as bad as Trump.  Nevertheless, she is a member of the establishment who represents the status quo.  Her foreign policy is hawkish, and she has a history of siding with Wall Street and the one percent against the rest of us.  I doubt that even her strongest supporters believe that she can be trusted to keep her campaign promises.

The argument in favor of voting for the lesser evil is that, unless we vote for Hillary, we give the election to Trump.  Is that true?  No, actually, it isn’t.

Leaving aside the issue of election fraud, which is a much bigger issue than most people seem to realize, how much your vote will count depends on where you live.  In the United States, we don’t elect presidents by popular vote. (Remember that Al Gore won the popular vote in 2000?) We have an Electoral College, and your vote only counts toward the number of electoral votes that your state has. Alaska, Delaware, Montana, both Dakotas, Vermont, and Wyoming have three each.  California has 55.

I live in California, and if the election is between Hillary and Trump, my conscience will direct me to vote for Jill Stein, the Green party candidate.  I won’t be wasting my vote.  I will be sending a message about the way I think the United States should be governed.  To me, a vote for Hillary would be an unprincipled vote that sends a message of compromise, of settling for the lesser evil.  Hillary voters are voting for the status quo; I will be voting for change.